1
1
Quest - Green Technology Products: Bidematic Bidet Attachment Orange TKO                   Vulcan Anti-scale System          (707) 578-6049
Bidet Library
A Bidet Runs Through It
How a Simple Stream of Water Can Change One Man's Life
By R. V. Scheide
Ladies and gentlemen, please forgive me, but there's just no polite way to say this: I haven't wiped my ass for more than a month. Since installing a bidet in my bathroom at home, I no longer have to rub myself raw with toilet paper. Instead, I direct a bubbling fountain of cool, soothing Sonoma County tap water toward my nether region. In seconds, I'm clean as a whistle. Thanks to my new bidet, keeping clean down there is no longer a problem.
But it definitely was a problem at one time, and I know I wasn't alone in sharing it. Who among us has not experienced the nagging itch caused by an inadequately cleansed bottom? Yet serious discussion of the topic is strictly taboo and rarely occurs in our culture, even within academic circles.
It's as if all alternative solutions have been flushed from our minds. Bidets are for sissies like the Japanese and the French. Here in the good old U.S.A., we wipe. We wipe harder, we wipe faster, and most of all, we wipe more. According to toilet-paper industry estimates, it takes 15 million trees annually to satisfy our voracious appetite for butt-wipe. Toilet paper production reached 100 million rolls per day in 2001. One of the latest marketing trends is larger packaging, like the 96-roll bundle offered by discount toilet-paper company ShitBegone. The company's motto speaks for us all: "Wipe your mind and your ass will follow."
According to an American bidet distributor, "If every household in the U.S. replaced just one roll of 500-sheet virgin-fiber bathroom tissue with 100 percent recycled ones or our bidet, we could save 297,000 trees, 1.2 million cubic feet of landfill space, equal to 1,400 full garbage trucks, and 122 million gallons of water, a year's supply for 3,500 families of four."
For the complete article, click here
1

The Tennessee Tree Massacre
by Alex Shoumatoff
The paper industry is destroying one of America's last great stands of native forest to bring you fresh shopping bags and toilet paper.
Â Â
THE FLYOVER
Â Â
If there were an international tribunal that prosecuted crimes against the planet, like the one in The Hague that deals with crimes against humanity, what is happening on the Cumberland Plateau in eastern Tennessee would undoubtedly be indictable.
Â Â
The crime -- one of many clandestine ecocides American corporations are committing around the world -- has taken place over three decades. About 200,000 acres on this tableland have already been clear-cut by the paper industry, and the cutting continues. Where once grew some of the most biologically rich hardwood forest in North America's Temperate Zone (which extends from the Gulf of Mexico to southern Canada), there are now row after row of fast-growing loblolly pine trees genetically engineered to yield the most pulp in the shortest time. But the paper industry's insatiable appetite for timber has met with unexpected competition from an equally voracious insect. In the last four years, an estimated 50 to 70 percent of the pines planted on the plateau have been devoured by the southern pine beetle. The entire South has been ravaged by the worst outbreak in its history of this native predator of pine trees, caused by the tremendous increase in the amount of pine available for it to eat on the industry plantations that have replaced the native forest. Unable to salvage its dead timber, the paper industry has been losing hundreds of millions of dollars. Yet it seems still committed to destroying what remains of the extraordinarily lush forest on the Cumberland Plateau, which, along with eastern Tennessee's Great Valley and the Cumberland Mountains, has the highest concentration of endangered species in North America. The loss of biodiversity is tragic but also absurd economically; it doesn't even make good business sense.
Â Â
On the plateau, this translates to an annual holocaust of about 3 million trees, 14 million if you count smaller trees and pines. What's driving this? Consider that a quarter of the world's paper is produced in the South. The average American consumes about half a ton a year -- that's factoring in toddlers and oldsters and people on life support. This is 111 times the per capita consumption in India, 300 times that of some African countries. Much of this consists of glossy catalogs and other junk mail, which I get a two-foot stack of each week; the sections of the paper that I chuck without even glancing at them (the Washington Post and other newspapers are printed on Bowater paper taken straight from the plateau); the inch-high stack of napkins we're handed whenever we get takeout; the 10 feet of toilet paper we rip off to clean ourselves. As one environmentalist put it arrestingly: "We're wiping our asses with habitat."
Â Â
For the complete article, clickÂ here
BUENOS AIRES, BIDET MECCA
by Jorge Rebagliati (Quest)
It is well known that the bidet was conceived in France in the first half of the 18th century (1700s) and then enjoyed great design and engineering improvements in England during the second half of the 19th century and beginning of the 20th. What is not well known is that the use of bidets flourished in the 20th century in Buenos Aires, the â€œParis of South Americaâ€?, probably more than anywhere else in the world. Between 1880 and 1930, the inhabitants of the then very prosperous Buenos Aires, known as â€œporteÃ±osâ€? (people of the port) were inspired by the European culture in all ways, following very attentively all the trends that came from that part of the world. With the discoveries by the French biologist and chemist Louis Pasteur, about the existence of microbes and their capability to cause illness in the human body, washing with water became an essential component of health practices in Europe towards the end of the 19th century.
This new hygienic movement took root quickly and deeply in Buenos Aires, eliciting massive changes to personal hygiene practices and to the potable water and sewage services. Washing the body with clean water became a common and desirable practice of the porteÃ±os, associated with the fulfillment of a social code that evenÂ 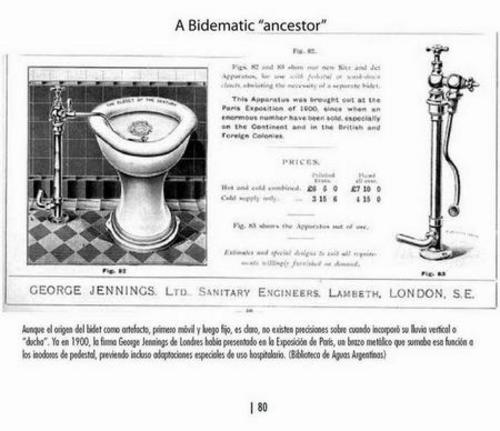 had connotations of moral virtue. This change even caused complaints by the Bureau of Health Works, when it could not keep up with the demand for potable water during the summer of 1900 because â€œthe whole Buenos Aires was bathingâ€?. Buenos Aires embarked on a massive renovation that, by 1896, had 22,000 buildings connected to the sewage network. Most of the city was connected to it during the first two decades of the 20th century.
The potable water pipe network also grew by leaps and bounds, achieving the supply of the total population by 1925. Together with the evolution of the sewage and potable water networks came the evolution of the bathrooms. Bathtubs, showers, lavatories and bidets, mainly made in England, were avidly bought by the porteÃ±os as their residences were connected to the networks. The latest advancements in bathroom fixtures came quickly to Buenos Aires, including, as early as 1901, bidets with hot and cold water and ascending (vertical) spray and a bidet apparatus with a movable metal spray wand that allowed incorporating the function of a bidet to a toilet. Breaking with old moral prejudices and embracing the new principles of personal hygiene, the inhabitants of Buenos Aires adopted the bidet more and more as a permanent feature of the bathroom. The initial moderate acceptance of the bidet that lasted into the 20â€™s, turned, soon after, into widespread acceptance and the bidet became a common and indispensable fixture of the bathrooms in Buenos Aires and the rest of the country. Buenos Aires became a leader in the use of the bidet, surpassing its original suppliers, England, France and the United States of America. Now, in the 21st century, Buenos Aires continues to feature bidets or bidet systems, such as the Argentinean Bidematic, in most bathrooms. Its importance is reflected in the value of real estate, since a property with bathrooms that have no bidets or hook ups for bidet systems command lower prices in the market. To a porteÃ±o and to most Argentineans, daily personal hygiene without a bidet is simply unacceptable.