These structures then stick to each other, adhere to surfaces and thus produce solid scale deposits in a short period of time. The Vulcan control unit generates dynamic high-frequency electronic impulses that are transmitted into the water.
After the treatment, when the liquid lime crystallizes, it does so as non-sticky, mono-crystal rods (see (2)).Â
These mono-crystal rods can no longer attach to each other or build deposits but are held in suspension in the water. In this form, they will be washed out of the piping system.
The reason scale builds up is because two processes happen simultaneously in untreated, hard water. First, when scale crystals connect to each other, thereby building scale, carbonic acid is produced. Second, this carbonic acid then resolves i.e. dissolves - existing scale deposits - a phenomenon called the â€œnatural resolving processâ€?. As the incrustation process is much faster than the natural resolving process, the pipeâ€™s working diameter constantly decreases.
Vulcan prevents new scale build-up, therefore, the natural scale resolving process only has to deal with the already existing scale. New incrustations no longer compete with the process of scale removal and the pipe gets gradually cleared out.
As carbonic acid can only dissolve scale from scale, but not the first layer of scale directly attached to the pipe, a thin, protective, carbonate layer always remains on the inside of the pipe. This prevents pitting corrosion in all metal pipes. This protective layer is formed in the whole piping system. As the treated water leaves the piping system, it carries the scale with it, as suspended particles. When drops of water dry in the kitchen and bathroom, the scale powder is left behind which can be removed easily with a damp cloth. There are no more hard deposits. Harsh cleaning detergents are no longer needed.
Vulcan is installed on the outside of the pipe. There is no direct contact with the water so the water is not chemically altered. Important minerals and natural elements remain for the human organism. Food and drinks keep their natural taste.
When exposed to temperature increase or change of pressure, the lime in untreated, hard water crystallizes in a burr-like structure (see (1)). 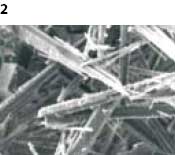